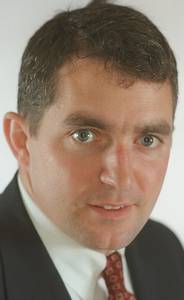 Medic Tends a Fallen Marine, With Skill, Prayer and Anger

KARMA, Iraq, Oct. 30 -- Petty Officer Third Class Dustin E. Kirby clutched the injured marine's empty helmet. His hands were coated in blood. Sweat ran down his face, which he was trying to keep straight but kept twisting into a snarl.

He held up the helmet and flipped it, exposing the inside. It was lined with blood and splinters of bone.

'The round hit him,' he said, pausing to point at a tiny hole that aligned roughly with a man's temple. 'Right here.'

Petty Officer Kirby, 22, is a Navy corpsman, the trauma medic assigned to Second Mobile Assault Platoon of Weapons Company, Second Battalion, Eighth Marines. Everyone calls him Doc. He had just finished treating a marine who had been shot by an Iraqi sniper.

He reached into his pocket and retrieved the bullet, which he had found. 'The impact with the Kevlar stopped most of it,' he said. 'But it tore through, hit his head, went through and came out.'

He put the bullet in his breast pocket, to give to an intelligence team later. Sweat kept rolling off his face, mixed with tears. His voice was almost cracking, but he managed to control it and keep it deep. 'When I got there, there wasn't much I could do,' he said.

Then he nodded. He seemed to be talking to himself. 'I kept him breathing,' he said.

He looked at Lance Cpl. Matias Tafoya, his driver, and raised his voice. It was almost a shout. 'When I told you that I do not let people die on me, I meant it,' he said. 'I meant it.'

He scanned the Iraqi houses, perhaps 150 yards away, on the other side of a fetid green canal. Marines were all around, pressed to the ground, peering from behind machine-gun turrets or bracing against their armored vehicles, aiming rifles at where they thought the sniper was.

The sniper had made a single shot just as the marines were leaving a rural settlement on the western edge of Karma, a city near Falluja in Anbar Province.

The marines had been searching several houses on this side of the canal, where they found five Kalashnikov assault rifles and bomb components, and were getting back into their vehicles when everyone heard the shot. It was a single loud crack.

No one was precisely sure where it had come from. Everyone knew precisely where it hit. It struck a marine who was peering out of the first vehicle's gun turret. He collapsed.

Petty Officer Kirby rushed to him and found him breathing. He bandaged the marine's head as the vehicle lurched away. Soon he helped load the wounded marine into a helicopter, which touched down beside the convoy within 12 minutes of the shot.

Once the helicopter lifted away, he ran back to his vehicle, ready to treat anyone else. He was thinking about the marine he had already treated.

He turned, faced a reporter and spoke loudly again. 'In situations and times like this, I am bound to start yelling and shouting furiously,' he said. 'Don't think I am losing my mind.'

He held his bloody hands before his face, to examine them. They were shaking. He made fists so tight his veins bulged. His forearms started to bounce.

'His name was Lance Cpl. Colin Smith,' he said. 'He said a prayer today right before we came out, too.'

'Every time before we go out, we say a prayer,' he said. 'It is a prayer for serenity. It says a lot about things that do pertain to us in this kind of environment.'

The only sounds were Doc's voice and the vehicle's engine thrumming.

He recited the prayer. There was a few moments of silence. 'It's a platoon kind of thing, if you know what I mean,' he said.

He listened to his radio headset and looked at Lance Corporal Tafoya, relaying word of the marines' movements. 'Right now the grunts are performing a hard hit on a house,' he said. He turned back to the subject of Lance Corporal Smith, 19.

'The best news I can throw at anybody right now, and that I am throwing to myself as often as I can, is that his eyes were O.K.,' he said. 'They were both responsive. And he was breathing. And he had a pulse.'

He listened to his radio. 'Two houses they've hit so far have both been swept and cleared.'

He looked at the reporter beside him. 'Do you pray?' he asked. 'Do that. I'd appreciate it.'

After a few minutes he started talking again. 'You see, having a good platoon, one that you know real well, it's both a gift and a curse. And Smith? Smith has been with me since I was'

He stopped. 'He was my roommate before we left,' he said.

He refilled his lungs and raised his voice. 'His dad was his best friend,' he said. 'He's got the cutest little blond girlfriend, and she freaks out every time we call because she's so happy to hear from him.'

He sat quietly again. A few minutes passed. 'The first casualty we had here -- his name was James Hirlston -- he was his good friend.'

'Hirlston got shot in the head, too,' he said.

He said something about Iraqi snipers that could not be printed here.

Then he was back to the subject of Lance Corporal Smith.

There had been many Iraqi civilians outside a few minutes before the sniper made his shot. Most of them had disappeared. Now an Iraqi woman walked calmly between the sniper and the marines, as if nothing had happened.

She passed down the street.

Petty Officer Kirby began to list the schools he had attended to be ready for this moment. Some he had paid for himself, he said, to be extra-prepared.

In one course, an advanced trauma treatment program he had taken before deploying, he said, the instructors gave each corpsman an anesthetized pig.

'The idea is to work with live tissue,' he said. 'You get a pig and you keep it alive. And every time I did something to help him, they would wound him again. So you see what shock does, and what happens when more wounds are received by a wounded creature.'

'My pig?' he said. 'They shot him twice in the face with a 9-millimeter pistol, and then six times with an AK-47 and then twice with a 12-gauge shotgun. And then he was set on fire.'

He paused. 'Smith is my friend.'

He looked at his bloody hands. 'You got some water?' he said. 'I want some water. I just want to wash my wedding band.'

He listened to the tactical radio. The platoon was sweeping houses but could not find the sniper.

The company started to move. It stopped at another house. The marines were questioning five Iraqi men. Doc watched from the road, waiting for the next call.

'I would like to say that I am a good man,' he said. 'But seeing this now, what happened to Smith, I want to hurt people. You know what I mean?'

The marines had not fired a shot.

They took one of the men into custody, mounted their vehicles and drove back to Outpost Omar, their companybase, passing knots of Iraqi civilians on the way. The civilians looked at them coldly.

Inside the wire, First Lt. Scott R. Burlison, the company commander, gathered the group and told them that Lance Corporal Smith was alive and in surgery. He was critical, but stable. They hoped to fly him to Germany.

Doc had scrubbed himself clean. A big marine stepped forward with a small Bible, and the platoon huddled. He began with Psalm 91, verses 5 and 11.

'Thou shall not be afraid for the terror by night, nor for the arrow that flieth by day,' said the big marine, Lance Cpl. Daniel B. Nicholson. 'For he shall give his angels charge over thee, to keep thee in all thy ways.'

Then he asked for the Lord to look after Lance Corporal Smith and whatever was ahead, and to take care of everyone who was still in the platoon.

'Help us Lord,' he said. 'We need your help. It's the only way we're going to get through this.'

Doc stood in the corner, his arm looped over a marine. 'Amen,' he said. There were some hugs, and then the marines and their Doc went back to their bunks and their guns.